In preparation for our upcoming performance of Copland’s Piano Concerto at the Mondavi Center at UC Davis, I spent some time with Andrei Baumann talking about Copland, music in general, and about the importance and role that art has in society nowadays.

Christian Baldini: How would you describe the Copland Piano Concerto to someone that’s never listened to it, or who knows nothing about it?

Andrei Baumann: Be open-minded. You will hear sounds that are jarring and dissonant. Expect the unexpected. After listening to the piece for the first time, you will hopefully want to listen to it a few MORE times, because it moves by so quickly and can seem so spontaneous and unexpected. If the first movement has gone by, and you have enjoyed the wonderful melodies exchanged between the piano and orchestra; the piano cadenza to begin the second movement will be a good hint for what’s to come!

CB: One could undoubtedly describe Aaron Copland as one of the great American composers, with vast influences on so many others such as Leonard Bernstein, but perhaps reaching out to other cultures as well such as Carlos Chávez or Alberto Ginastera. In this concerto, the obvious references to jazz and blues are crystal clear and omnipresent, and in some of his other music we have references to the “folksy feeling”, in Copland’s own words, or even the adoption of serialism. These terms can all equally be used to describe Copland’s varied output. How do you see Copland’s legacy in the music of the 20th and 21st century?

AB: Copland’s language is very new to me. I remember working on his Sextet at a chamber music festival. It took such a long time for us to find a level of comfort while working on this piece. I love his songs set to Emily Dickinson poetry, and of course Appalachian Spring.

I think Copland’s music is very accessible to audiences. In the 21st century, we have become accustomed to hearing so many different sounds. As someone whose ear is more drawn to tonality, I naturally am inclined towards Jazz Standards and Classical harmony. The musical world today is so different. Copland’s music feels like a mish-mash of the “old and the new.” He is truly a great American composer.

CB: Everyone knows Gershwin’s Rhapsody in Blue, which was written just two years prior to the Copland Piano Concerto, but why do you think such few people know about this piece? I was fortunate to get to know this piece as I was assisting Michael Tilson Thomas with the San Francisco Symphony, and one week Inon Barnatan came to play this piece. What do you think is the reason that  this wonderful concerto has not become a staple in the repertoire?

AB: This is a great question, for many reasons. One of the reasons that I have become so drawn to this piece is that the soloist and orchestra play equally important roles. I can imagine parts of the second movement being played by a big band! Sometimes I have the feeling that I am playing in a jazz combo, big band or large chamber music ensemble. I can’t understand why this concerto is not performed more often. I wonder if the fact that the orchestra and soloist parts are so intertwined makes this piece less appealing to learn. Certainly it is not a concerto that would be suitable for piano competitions, which are such a staple of ones early musical development. Hopefully this concerto will be performed much more in the future!

CB: How did you start with music?

I was introduced to music in a very unique way. My father loves Classical music, and introduced me to this music at a very young age. I fell in love with this music instantly. I have always loved playing chamber music: the interaction with other musicians, exchanging ideas, coming up with a common interpretation. A vivid memory was an outreach performance of Schubert’s Trout Quintet in Toronto. Three of us absolutely adored the piece, and we got two friends to join our group. We only performed the piece once, but I was felt as though I couldn’t stop smiling inside for the full hour! We were so lucky to play such a glorious piece of music, and communicate this together to an audience.

CB: What have been the most inspiring experiences and people to you in your professional life?

AB: In recent years, people who have inspired me the most are artists who are introducing music to the community. Some of these families would never have access to music, and these musicians educate students in a most commendable way. Locally here in Davis, Sandra Brown; in Vacaville, Chase Spruill is doing wonders for the music program at Sierra Vista; and in Providence, Rhode Island, Adrienne Taylor: who represents Community Music Works in a most admirable way. These individuals have a unique ability to communicate the language of music and to inspire the next generation.

CB: Are there any other piano concertos that you would love to play after this one? Which ones?

AB: In no particular order: Rachmaninoff 2nd, both Chopin concertos, and Beethoven’s 3rd and 4th concertos. Playing a concerto is such a unique and thrilling experience.

CB: What would you say is the role of music in society nowadays?

I believe that music can play a much greater role in society. In this country, Classical music and Jazz are appreciated by a wonderful group of enthusiasts. While I’m extremely grateful to these enthusiasts, the greater population seems very much out of touch with this tradition. It would be easy to see this as a fault, however the problems are numerous. Music and art should be a foundation of our education. If this music is presented and celebrated from a young age, then the group of enthusiasts could grow in years to come. In an age where we seem to be more and more isolated, music can create community. Thankfully it is still not possible to have an ensemble made up of iPhones and computers instead of musicians. People need to be involved, and this is clearly positive!

The excuse that tickets for concerts are too expensive simply doesn’t work. How expensive is it to go see a sports event in Sacramento or the Bay area? Are people just simply losing interest? Somehow music seems to be losing its way, and I really believe it starts from the beginning. Hopefully people will still appreciate listening to a Beethoven symphony in 100 years.

An active soloist, chamber musician, Andrei Baumann has performed extensively in the USA, Europe, Canada and Venezuela. As winner of the 2009 Borromeo String Quartet Guest Artist Award, he performed with the quartet in Jordan Hall on January 29th, 2009. His Carnegie Hall debut at Weill Recital Hall occurred in May 2008 with violinist Lily Francis as part of the Distinctive Debuts series. Other notable performances include a solo recital on the Sundays Live Concert Series at Los Angeles County Arts Museum which was broadcast by KCSN, 88.5 FM, solo recitals at the Crocker Art Museum Classical Music Series in California, performances at Caramoor Festival and with Itzhak Perlman at the Perlman Music Program. Andrei has performed in masterclasses for such distinguished artists as Elisso Wirssaladze, Pavel Gililov, Leon Fleisher, Claude Frank and Marc Durand. Among the numerous festivals he has participated in are Corsi in Sermoneta, Italy; Ost-West Musikfest in Krems, Austria; Internationaler Kammermusikkurs in Böhlen, Germany; Kuhmo Chamber Music Festival in Finland; Banff Centre for the Arts and Orford Arts Centre in Canada; and in the USA, Aspen Music Festival, Perlman Music Program.

Recent performance highlights have included a Mothers Day performance of the Grieg Piano Concerto with Peter Jaffe and the Auburn Symphony, and numerous chamber music performances with cellist Susan Lamb Cook and friends. Mr. Baumann is a frequent performer at the Mondavi Center, Harris Center and others venues in Northern California. He also recently released a second album Miroirs, which includes works by Bach, Debussy and Ravel.

Mr. Baumann has a Masters of Music in Piano Performance from New England Conservatory in Boston, a Künstlerischer Ausbildung Diploma from the Hochschule für Musik und Darstellende Kunst in Stuttgart, Germany, and a Bachelor of Music degree at the Glenn Gould School of The Royal Conservatory of Music in Toronto, Canada. His most influential teachers have been Andre Laplante, Jamie Saltman and Vivian Hornik Weilerstein. 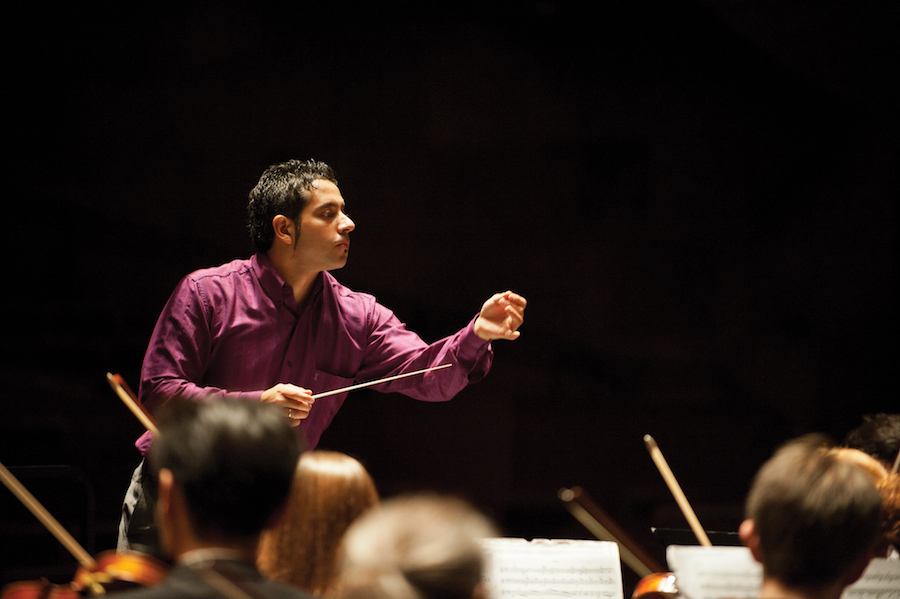 Christian Baldini started conducting at age 19, and he came to international attention when he made his debut in Salzburg as a finalist for the Nestlé/Salzburg Festival Young Conductors Award. He has served as Music Director of the Camellia Symphony Orchestra in Sacramento since 2012. He has also served as the Music Director of the UC Davis Symphony Orchestra and Barbara K. Jackson Professor of Conducting at the University of California, Davis, since 2009. With these orchestras he has conducted multiple world premieres, and local premieres of such important works as Varèse’s Amériques, Luciano Berio’s Sinfonia, Ligeti’s Violin Concerto, and many relevant symphonic cycles like those by Sibelius, Brahms and Schumann.
Baldini has conducted opera at the English National Opera (most recently Verdi’s Aida at London’s Coliseum in November 2017), Teatro Colón in Buenos Aires (Dallapiccola’s Il prigioniero, Dallapiccola’s Volo di notte, and the world premiere of Oscar Strasnoy’s Requiem), and the Aldeburgh Festival in England (Britten’s The Rape of Lucretia). Since 2009 he has been the Music Director of the Rising Stars of Opera in collaboration with the San Francisco Opera at the Mondavi Center for the Performing Arts, showcasing some of the most talented operatic singers of the young generation.
Baldini previously served as an assistant conductor with the BBC Symphony Orchestra and the San Francisco Symphony. His CD recording “Mozart: Opera Arias and Overtures” conducting the Scottish Chamber Orchestra was chosen as “Recording of the Month” by the BBC Classical Music Magazine, and received 4- and 5-star reviews by the specialized press. He is a frequent international guest conductor with appearances leading the Buenos Aires Philharmonic, Munich Radio Orchestra, San Francisco Symphony, National Symphony Orchestra (or Argentina and Portugal), Teatro Argentino de La Plata and the Florida Orchestra.
For more information visit: http://www.christianbaldini.info

View all posts by christianbaldiniblog

4 thoughts on “Christian Baldini in conversation with pianist Andrei Baumann”