In preparation for our performance of Peter Lieberson’s “The Six Realms” (for cello and orchestra), I had the occasion of asking our wonderful soloist Anssi Karttunen a few questions:

Christian Baldini: Anssi, what a treat to get to perform this piece with you as our soloist, thank you so much for joining us! This will be the first time that this piece will be performed without the cello being amplified, is that correct? You were very good friends with Peter Lieberson, so can you tell us the history behind the reason for this piece being published for amplified cello, despite the composer’s wishes?

Anssi Karttunen: I know exactly what must have happened at the first performance with Yo-Yo Ma because the same thing has happened to me with other first performances. There is no piece more difficult for balance than a cello concerto. Nowadays there is mostly very little time to rehearse for any orchestral piece and the one aspect that takes time to sort out is balance. So it sometimes happens that in order for the cello to be heard in the first performance one has to ask for a discreet amplification. Usually in the following performances the composer can work out the problematic passages. That is exactly what happened in Toronto, the only problem being that it was then published as a piece for amplified cello and orchestra which was not Peter’s original idea. When I suggested that we take a look at the dynamics together in order to make a version that can be performed and rehearsed in normal time he was delighted. We were both convinced that Six Realms would work very well with some small revisions which he was going to do himself. Unfortunately he got very ill and wrote to me some time later that he would not able to finish the work but that he trusted I would make the right decisions. A few months later he passed away, it has taken 8 years to find the right conditions for this performance.

CB: This work is based on some Buddhist principles, and the concept that (in Lieberson’s own words) “differing states of mind and emotions colour our view of the world and shape human experience”. We know Lieberson was a Buddhist, but can you develop on this and how it might have affected his compositional output?

AK: I don’t think Peter is trying to give us a lecture on the Buddhist idea of cycle of rebirths through six realms, but as it was for him a very concrete and deep belief it gave him a story thread to follow and to tell through his music. There is a universality in the message of the piece that does not require knowledge on Buddhism. The movement through different stages of existence and emotional states can be felt and received either concretely or as an abstraction. The sincerity of Peter’s relation to his own music and his beliefs is there for all of us to feel.

The Six Realms is structured as follows:

1. The Sorrow of the World (introduction)
2. The Hell Realm (aggression: acute, self-perpetuating anger at the world and ourselves)
3. The Hungry Ghost Realm (passion: the need to possess or continually consume; we are never satisfied because we can never get enough)
4. The Animal Realm (ignorance: an obsessive need to control or to find security)
5. The Human Realm (passion: the desire for something better, and a lessening of self-absorption, allows for the possibility of our becoming dignified humans who long for liberation from these six realms of existence. It is only from this realm that we are able to move on to achieve Enlightenment: the right way to view, and interact with, the world.)
6. The God Realm (ignorance: blissful self-absorption of our godlike powers, until doubt sets in and shatters our confidence) and The Jealous God Realm (aggression: extreme paranoia and competitive drive; we never trust anyone or their motives)

CB: What is so very special to you about this piece, and, are you hoping that now that we finally perform it without amplification (with some of the edits that you did with PL before he died), it will finally become a staple of the Cello Concerto repertoire?

AK: The important thing is not that we play it with or without amplification, it is simply that the piece gets heard again. It often happens even to masterpieces that for one reason or another they do not receive the success they deserve immediately and need to wait for their moment. I sincerely think that this is one of the great American concertos and there are not too many of those for any instrument. At the same time it is not merely American, it is a universal piece. Peter didn’t want his music to sound American or Buddhist, he followed the principle of « being brave enough to experience existence without dogma or belief of any kind ». I hope we can bring justice to this wonderful piece.

CB: You have given the world premiere of over 180 works (and counting), and have worked with some of the most celebrated composers of our time such as Esa-Pekka Salonen, Luca Francesconi, Kaija Saariaho, and Pascal Dusapin. Can you tell us why it is so important to actively promote the works of living composers?

AK:There are three main reasons why working with living composers is essential for us performers:

– Firstly: Music has changed a lot during history but the work of a composer has remained essentially the same, It still starts with an empty page and through their own individual battles composers manage to put down on paper the closest approximation of their music that notation allows. Knowing how different composers work today is the best way to imagine how composers worked earlier, how they all are different and have very different priorities for us performers.

– Secondly: There is nothing more exciting than being part of the creative process. The moment when a piece is born. Being the first messenger who allow an audience to discover a new creation is a priceless opportunity.

– Thirdly: The work of a performer is ephemeral. Nothing remains of a concert, sometimes a recording, but often not event that. CDs exist, but recordings often fall out of fashion and our work is eventually forgotten. The only legacy we can leave behind are the pieces that we were able to inspire composers to compose. So through these pieces which will survive in the hands of other performers a little bit of my happy moments will survive for future generations.

CB: Can you share with us some interesting, amusing or charming anecdotes of your life as a touring musician, traveling around the world working with wonderful musicians from all walks of life?

AK: Friends are what is the most interesting, charming and amusing thing about the life of a traveling musician. And coming back to places to meet the friends again. Sometimes one meets a person that marks your life and never meet them again. Sometimes a surprising place or friend accompanies you throughout the rest of your life. One such place is Davis; when I first came here 20 years ago I had no idea that a recording Pablo Ortiz played for me of Piazzolla and Troilo led us to a collaboration that has produced now already two CDs and countless pieces and concerts. And Davis itself became a place were I am now coming for my fourth visit, each time with a completely different project. Another such person was Peter Lieberson, I only met him on two occasions, but our bond was so strong that we became very close and he and his music has accompanied me far beyond his passing.

CB: Wow, that is amazing to hear. Now changing completely the subject, and dreaming big, tell us, if you were appointed Artistic Director of a Music Festival with unlimited resources, and you had to choose the programming for 3 symphonic programs (with unlimited choices of soloists, orchestras, choirs, conductors), who would you invite, and to perform what?

AK: If you offer me unlimited resources, then I can take the liberty of traveling in time. The first concert I would program is the one that I in fact programmed four years ago in Helsinki when I directed the Musica nova Festival. This was such a happy moment of being with and listening to friends that I would love to offer it to more people to enjoy. My closest friend Olly Knussen sadly passed away last summer so the only way this concert could happen is with these unlimited resources.

2:
The second concert would be a trip into history. To meet and hear two of my heroes and to understand how they performed themselves. Schumann’s cello concerto I would have to offer to play myself, because no cellist in his lifetime wanted to play it and he never heard it. Hearing Brahms and his friends perform the Double Concerto would be the ultimate way of understanding his music and the way he performed it himself. So much has changed since those days and there are no records to listen to, we can only guess how it may have been.

I would want to sit in the audience for this concert that was one of the most important moments in the history of music. Plus I would be sitting next to so many incredible people, Berg, Webern, Zemlinsky and many others. And if I had organised the concert I would have the chance to take them all out for dinner afterwards.

CB: That was very illuminating, and it speaks very much about the great breadth of repertoire that is so important to you. Once again, Anssi, thank you very much for coming to Davis to perform this wonderful music with us, and for sharing your very interesting insights with us! 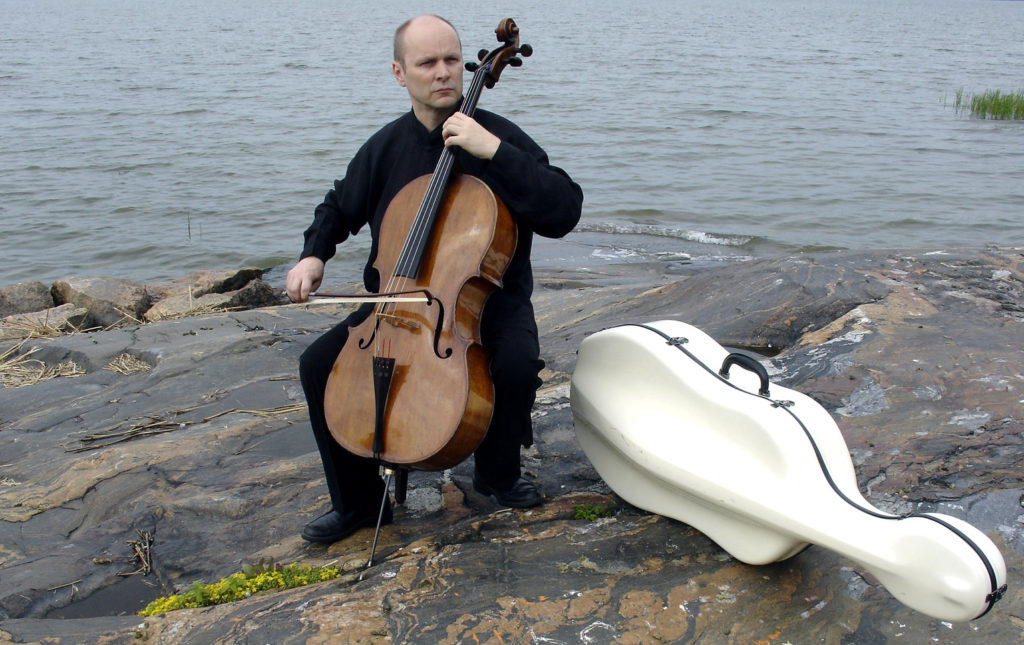 BIOGRAPHY
Anssi Karttunen performs all the standard cello works, has discovered many forgotten masterpieces and transcribed numerous pieces for cello, or chamber ensembles. He is a passionate advocate of contemporary music and his collaboration with composers has led him to give over 180 world premieres of works by composers as diverse as Magnus Lindberg, Kaija Saariaho, Rolf Wallin, Luca Francesconi and Tan Dun.

Karttunen plays in the Zebra Trio with the Austrian violinist Ernst Kovacic and Canadian viola player Steven Dann. He appears in recitals with Magnus Lindberg and Nicolas Hodges, with the violinist Jennifer Koh and with the multi-instrumentalist John Paul Jones.

He plays with many of the best orchestras of the world and in recitals and chamber music at major festivals in Europe: Edinburgh, Salzburg, Lockenhaus, Spoleto, Berlin, Venice, Montpellier, Strasbourg, Helsinki etc..

The CD´s of Anssi Karttunen range from Bach on a Violoncello Piccolo, Beethoven on a classical cello and 20th-Century works for solo cello to concertos with London Sinfonietta, Los Angeles Philharmonic and the Philharmonia Orchestra with Esa-Pekka Salonen. Sony Classical issued CDs of the Concertos of Lindberg, Saariaho and Salonen. Deutsche Grammophon issued a DVD of Tan Dun’s The Map for cello, video and Orchestra and a CD of Henri Dutilleux’s Cello Concerto (Grammophon Award 2013). Recent CDs include also Brahms’s Chamber Music and a solo recital on Toccata Classics, Saariaho Trios and Lindberg Cello music on Ondine, Tangos on Albany Records and Colin Matthews’s Cello Concerto 2 for NMC.

He is a founding member of Petals, a non-profit organisation for the production and sale of CDs and scores on the Internet. His transcriptions include Brahms’s Piano Quintet for String Quintet and Händel-Variations op. 24 for String Trio, Schumann’s Cello Concerto for Cello and String Orchestra and Album for the Young for String Trio many of them available through http://www.petals.org.

Karttunen plays a cello by Francesco Ruggeri, Cremona circa 1670.

View all posts by christianbaldiniblog